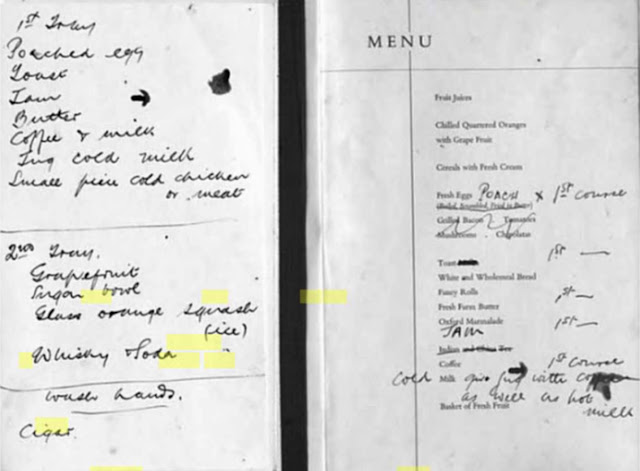 
You have to have some chutzpah to order off-menu, considerably more so when you’re on an aeroplane, but this was not a quality that Winston Churchill ever lacked.

On his last flight to the USA as Prime Minister, Churchill was travelling with Foreign Secretary Anthony Eden. Unhappy with the breakfast menu provided by BOAC, he decided to adjust it, initially simply marking up his amendments alongside the printed menu. Then, to avoid the possibility of any confusion, he simply turned the card over and wrote exactly what he wanted which was:
1st Tray
Poached egg
Toast
Jam
Butter
Coffee and milk
Jug of cold milk
Small piece of cold chicken or meat.
2nd Tray
Grapefruit
Sugar Bowl
Glass orange squash (ice)
Whisky soda.
He then added:

‘Wash hands’ [presumably he wanted some kind of flannel]
Cigar

Of course this hearty repast may have been for both him and Eden, but it is more likely it was all destined for the great statesman’s tummy since he was very fond of the pleasures of the table. Or was, as Bertie Wooster once put it, “a greedy hog”, this being the politician who, when shown what a typical wartime food ration looked like, remarked that it was quite a decent looking meal before being advised that it was actually all the food for a week.

When on terra firma, Churchill’s meals were prepared by Georgina Landemare whose bestselling book ‘Recipes from No 10’ details his likes (jugged hare, turtle soup, tinned mandarin slices) and dislikes (marmalade, sauerkraut, all Chinese food). His meals often ended with a cheese platter, and to accompany it, a cigar and champagne, ideally Pol Roger.

Churchill himself could not cook at all but still regarded food as a useful part of his diplomatic armoury, as Cita Stelzer outlines in her survey Dinner with Churchill: Policy-Making at the Dinner Table. "It is well to remember that the stomach governs the world,” he said, putting on impressive spreads at the Chequers estate to ease the wheels of government and international negotiation.
The BOAC menu - smudges, ink stains and all - went up for auction by Mullock’s Auctioneers on St George’s  Day, 2009, and made £5,600.