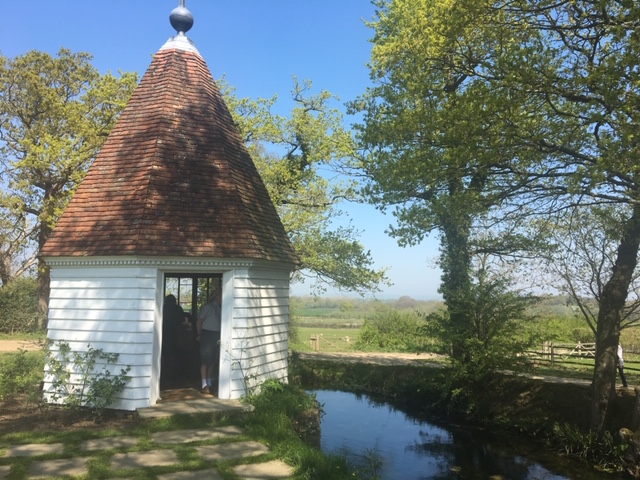 It was my wedding anniversary recently so my wife and I spent Easter in Kent, especially around the Sissinghurst area (we stayed here which is a pleasant 15 minute walk away from the estate). Not only is the National Trust property home to Vita Sackville-West's writing tower but also her son Nigel's marvellous writing gazebo which is next to the moat and has quite lovely views over the surrounding countryside (though none back towards the house).

He built it in 1969 as a memorial to his father, Harold and after restoration work is now open again to the public. Nicolson used it as an office - he wrote his famous Portrait of a Marriage here - even when visitors were coming to the garden around him. Intriguingly, it is built to the same spec as the Apollo 11 lunar module (which also happily coincides with the oast architecture of the area). The NT is restocking the shelves with the same editions of the books he worked with and kept in the gazebo.

Here is Nicolson writing about the gazebo at the start of his book Long Life:


"It is a midsummer afternoon and I am sitting in the gazebo at Sissinghurst, having locked the door to separate myself from the strolling tourists. The windows face outwards on a familiar view, my favorite since childhood. In the foreground is the angle of the moat flagged with yellow iris, then a hedgerow rose in flower, then the green of growing corn and the darker green of trees, fading into the washy blue of the horizon ridge. I can see from here only two buildings: a white oast and a red roof. The view can be little changed since Jane Austen's day. The only movement is of an elderly lady dressed in white walking toward me up from the farm track.

"This is my summer office, but an office without telephone, light or heat, so I cannot use it in the winter. But of all places where I have lived, the Sissinghurst gazebo is the one with which I would most like to be identified. With the help of Francis Pym, the architect, I designed it and dedicated it to the memory of my father, Harold Nicolson, who died in 1968, the year before the gazebo was built." 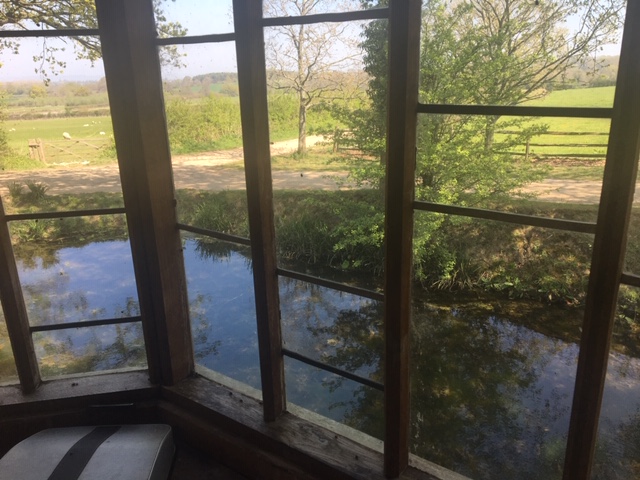