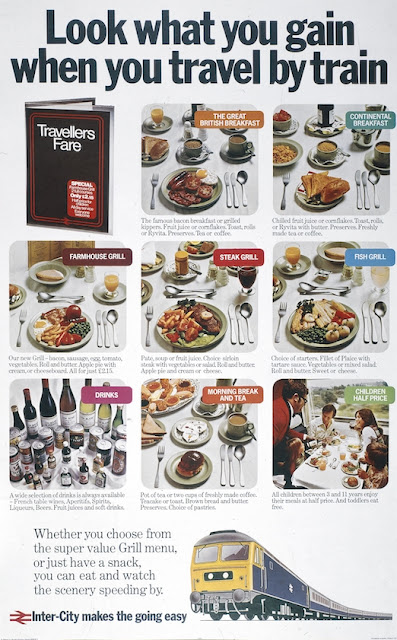 [note: We wrote more chapters for Menus That Made History than we could eventually cram into the book. Here's one of those that got away.]

Railway dining cars were once a delight for the travelling epicure. The first dining car in England was launched on the East Coast route in 1879, the ‘Prince of Wales’ Pullman car serving diners from its fully-equipped kitchen. Over the decades that followed, smartly dressed waiters, silver teapots, and good quality china made it a memorable experience for diners, while cunning second class ticket holders could effectively upgrade themselves into what were more convivial surroundings for the price of a good meal.

100 years later, the institution was still going strong (though not perhaps with quite the crispness in the tablecloths of previous years). Here’s what was on offer in the British Rail restaurant car in 1971:

The cost was £1.30 with coffee an extra 10p, and liqueurs, cigars and cigarettes also available.

The most (in)famous offering was the British Rail sandwich, a target for travellers from the days of Victorian novelist Anthony Trollope (‘the real disgrace of England is the railway sandwich’ he wrote in his 1869 novel He Knew He Was Right), through the middle of the century (The Collapse of the British Railway Sandwich System was the title of an episode of The Goon Show in 1954) and into the 1970s when British Rail’s catering division became Travellers’ Fare and – despite the addition of Prue Leith to its advisory panel - the sandwich became the constant butt of comedians’ jokes. As it did in France as a "sandwich SNCF".

According to a guide issued by British Rail’s Director of Rail Catering Bill Currie in 1971, sandwich fillings were to be concentrated in the centre of the sandwich so that a diagonal cut showed them to their best advantage. Portion control demanded that  ⅔ oz of either chicken or turkey found their way into a meat sandwich, while an egg sandwich featured half an egg. Adding cress was tricky as one punnet was to be divided into twelfths. These rules were crucial according to Mr Currie who said he wanted to ensure these meals were “the best on the track”. While we might have smiled at British Rail sandwich jokes, in its last year of operation, BR sold eight million of them.

The poster above dates back to 1977 and features favourites such as the farmhouse grill (£2.15), half price meals for children with toddlers eating for free, and plenty of beer in cans.

There were still 250 dining cars in 1997 but sadly, the restaurant car service dwindled until it was finally wound down in 2011 and replaced with "at-seat offering" for first-class passengers. The last East Coast service ran that year on the 19.33 from London Kings Cross to Leeds offering omlette Arnold Bennett, rib-eye steak, leg of lamb, fillets of trout, and all rounded off with blue cheese, apple and walnut strudel, and ginger and rhubarb pavlova.