The first Chinese restaurant menu in Britain: Menus That Made History 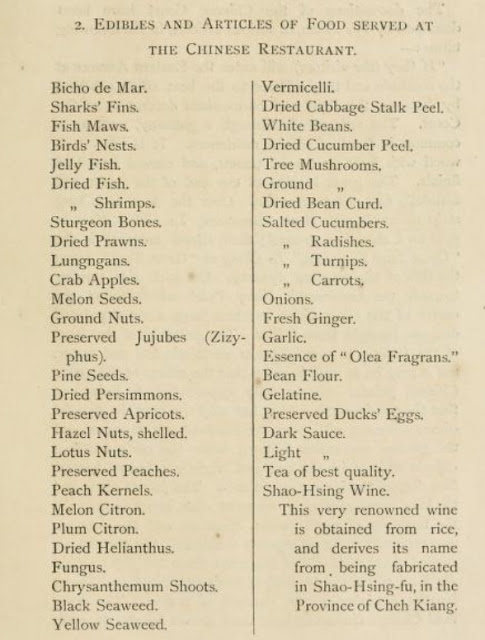 (note: another of the menus written for Menus That Made History but ultimately missed the cut)

The British taste for Chinese cuisine goes back to the 17th century when tea started to become a highly popular import. The first Chinese foodstalls in London emerged in the 1880s, catering to Chinese sailors and the growing Limehouse Chinatown community (an area bombed heavily during the second world war). The 1891 Census reveals that 582 Chinese people were living in England and Wales.

However, what really put Chinese food on the map was the International Health Exhibition, all but forgotten today, held in South Kensington in 1884. The goal was to promote healthy living in the areas of ‘Food, Dress, the Dwelling, the School and the Workshop’ but also to brag about Britain’s high-tech developments in living conditions, with items such as flush lavatories and blueprints for cottages proudly on display. Four million people visited the Exhibition between May 8 and October 30 to pick up useful ideas for their own daily lives - the aim was very much for people to interact with the exhibitors and buy food and other items from the shopkeepers’ stalls.

Despite the emphasis on homegrown genius, the event was genuinely international with exhibitors from the USA, Europe and Japan. One of the most popular areas was The Chinese Restaurant. This was a reconstruction of a real Chinese restaurant, built in Hong Kong and shipped over to London under the supervision of Sir Robert Hart, head of the Chinese Maritime Customs. It was staffed by nine Chinese chefs from Beijing and Guangzhou, apart from the head chef who was French (though had spent a dozen years working in Beijing). Together they provided the first ever Chinese menu seen in Britain, outlined above.

Here’s how the official guide describes it:


“The charge for admission to the dining-room, which includes the price of dinner, is seven and sixpence… The dishes are, of course, perfectly novel to untravelled Europeans; amongst them are to be found the celebrated bird’s-nest soup, which is said to be delicious, white-shark’s fins, and a dish made of the beche de mer, or sea-slug, which is  said to resemble the green fat of turtle. The dinner includes Chinese wine, or “Shao-sing” which is served up warm, and also Imperial tea, which is said to cost seven shillings a pound at Pekin. A Chinese band plays in the restaurant. Its music, to Western ears, is most peculiar.”

Some of the other dishes are rather more alarming. It’s unlikely, for example, that readers will have tried tiger sinews, although using tigers in food and drink has a long history in Chinese cuisine and medicine. Bears – one of the ‘Eight Rarities’ delicacies in ancient China - are now classed as endangered so their claws/paws are officially unavailable, though a black market for them still exists and as recently as 2016 Chinese police intercepted smugglers trying to bring in $500,000 worth of bear paws from Russia. Also not to everybody’s taste is blood of ducks’ head, a soup, sometimes eaten with vermicelli, and other parts of the duck (gizzard, liver, intestines) with the duck’s blood fermented and served in blocks like cubes of tofu.
There was also a Chinese tea-garden at the Exhibition. Here’s the official guide again:

“According to the Chinese theory when a man goes to a restaurant he ought to feel cheerful, sociable, and happy; and on the other hand, he goes to a tea-room to reflect, or to indulge in sober and earnest conversation. Accordingly we find the decorations of the two rooms reflect these ideas. The dining-room is very gay, full of light and colour, and the tea-room is relatively sombre.”

Overall, there was a mixed reception to the menu in the press but it was popular with the public visitors.

It was another two decades before the first Chinese restaurant opened its doors in London, in 1908 in Glasshouse Street, off Piccadilly Circus, but research shows that Chinese food is now one of the most popular choices in Britain with more than one in ten eating it at least once a week.