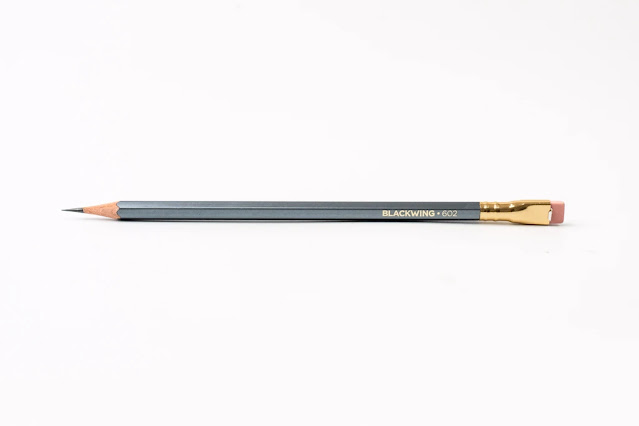 I was recently given a box of Blackwing 602 pencils for my birthday and can strongly recommend them. Here's an excerpt from my forthcoming book 'Writers' Rooms' about John Steinbeck's love of pencils, especially this brand:

But whichever writing room he worked in, Steinbeck – who liked to write rapidly - had one prerequisite. Pencils. And plenty of them.

“I like the feeling of a pencil,” he said, which is something of an understatement. He used hundreds on each new book, sharpened to a point which he son Thom called ‘surgical’. “The pure luxury of long beautiful pencils charges me with energy and invention,” said Steinbeck.

He was particularly keen on round ones, as he found hexagonal pencils cut into his fingers. Nevertheless, he wrote with them so often that he developed a grooved callus on his finger where the pencil rested. Another requirement was that they be black so that they did not distract him.

Steinbeck also had an electric sharpener of which he was very fond, calling it his most used and most useful possession. Since he began each morning with a wooden box of 24 fully sharpened pencils which he rotated and resharpened during the day, it was certainly a great help. As one began to blunt after a few lines, it would be placed into a second box to await resharpening while he picked up a new pencil to continue writing. As the process continued, the pencils would shorten and once the metal holding the rubber on the top touched his hand, he would hand them over to his sons.

“For years I have looked for the perfect pencil. I have found very good ones, but never the perfect one. And all the time it was not the pencils but me. A pencil that is all right some days is no good another day.” Had soft writing days and hard writing days, according to pencils. Sometimes it changed in the middle of the day. Super soft pencils didn’t use very often as “must feel as delicate as a rose petal to use them”

Favourite brands included the Blaisdell Calculator 600, the Eberhard Faber Mongol 480 (actually yellow), the Eberhard Faber Blackwing 602 (tagline: 'Half the presser, twice the speed'). Bought four dozen pencils at a time. When the metal of the rubber on the pencil touched his hand, he discarded it to make way for a new one.

Steinbeck described this part of his writing process as “pencil trifling”.